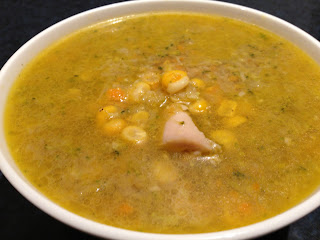 Well the cooler weather is definitely upon us now in Perth and in the past week we have also had a crazy amount of rain (until now, I have barely seen any rain in Perth since we moved here in January!) and some strong winds - the winds reminded me a bit of the September winds in the Hunter Valley! Anyway, back to the topic at hand... so this cooler weather definitely calls for more soups for dinner.  The chicken broth that I used to make this soup takes some time to make but it is well worth it (and the broth recipe makes a nice big batch if made in a slow cooker, I had enough left to freeze a batch for another recipe), and gives the soup extra nutrients as well as a depth of flavour... though as per the recipe below, you can substitute this broth with stock.

Method:
1.  Into a saucepan on medium heat, add the cooking fat, diced onion and minced garlic.  Cook, stirring, until onion has softened.

2.  Grate or process the zucchini, carrot and broccoli.  Add to saucepan along with corn kernels and sliced chicken.  Cook, stirring, for a couple of minutes.

3.  Add broth/stock, apple cider vinegar and parsley.  Bring to a boil and then reduce heat to simmer for around 10 minutes.