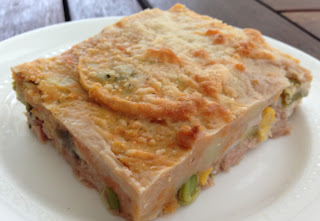 This dish is great for using up all sorts of veggies that might be in the veggie crisper in the fridge!  Even my super fussy 5yo loved this and ate up all the veggies on his plate!

3.  While the potatoes are cooking, flake the tuna and spread out along the base of a baking dish.  Sprinkle diced veggies over the top of the tuna. 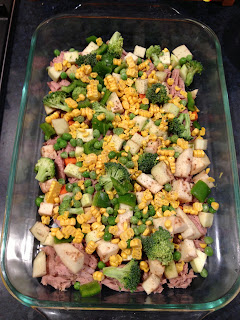 4.  Make a batch of white sauce as per the recipe in the Thermomix EDC cookbook.  Or to make on the stovetop: in a saucepan on medium heat, melt the butter and whisk in cornflour.  Gradually add the milk, whisking the whole time.  Season with salt, pepper and nutmeg and whisk until slightly thickened.  Pour the white sauce all over the tuna and veggies in the baking dish.

5.  Spread the mashed potato out in the baking dish.  Top with grated parmesan.

6.  Bake for around 30 minutes or until the cheese is golden and veggies are cooked through.
Posted by Iwa Brown at 9:20 AM