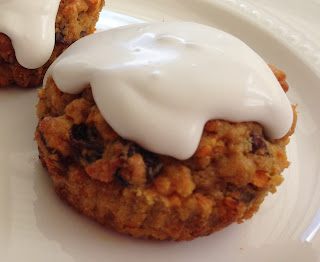 I have always loved carrot cake.  Though the addition of pineapple to carrot cake takes the flavours to another level I think!  I also had my 3yo "sous chef" helping me to make these!  Though next time I will leave out the nuts so that I can pop these cupcakes into the kids school lunchboxes.

2.  In food processor or Thermomix, grate the carrot and pineapple until finely chopped (5sec/sp6 in Thermomix).  Tip into a large bowl.

3.  To the carrot and pineapple, add the remaining cupcake ingredients.  Stir to combine.

4.  Divide amongst cupcake cases and bake for 20-25 minutes or until a skewer inserted into the centre comes out almost clean.  Allow to cool completely.

5.  To make icing: open the cold cans of coconut cream and scoop the cream portion off the top and into a bowl.  Add the maple syrup and vanilla and whip with an electric mixer until creamy.  Tip into a bowl and keep in the fridge, icing the cupcakes as required.

(To make icing in Thermomix, insert butterfly into TM bowl.  Add cream portion of coconut cream, maple syrup and vanilla.  Whip 1min/sp4, tip into a bowl and keep in the fridge.  Ice cupcakes as required).
Posted by Iwa Brown at 3:55 PM