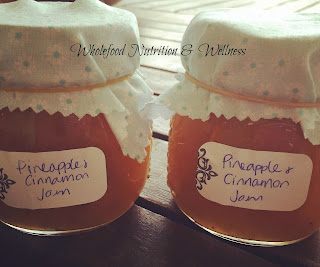 I was told this jam flavour sounded a bit odd but I don't know.... I thought it sounded summery and exotic and delicious!   And it certainly turned out that way.  I'm still in my study period and exam period starts next week.  Making these preserves and things for Christmas pressies is certainly a welcome distraction from studying!

Add all ingredients (except lime juice) to a pot and cook on a low heat, stirring frequently, for about an hour or until the jam sets when tested.  Stir through the lime juice, remove the cinnamon quill and then put the jam into sterilised jars.

If making this in the Thermomix, follow the above method but cook on 100deg/sp1.