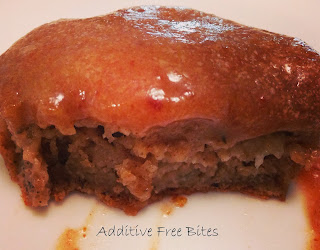 Keeping the kids' lunchboxes interesting can be a bit of a mind boggling exercise sometimes.  They do have their favourites that they like me to make but I like to keep things interesting.  This is a super easy recipe for cupcakes which freezes well (without the caramel sauce on top - the sauce is just for us to have at home but for the lunchboxes, I use un-iced cupcakes) and the cupcakes are super moist on the inside thanks to the pear sauce.

Method:
1.  Make pear sauce: peel the pear, chop into pieces and boil in some water until tender.  Drain off the water and mash the pear.  Set aside to cool.

2.  Preheat oven to 180 degrees and line a cupcake tray with cupcake cases.

3.  Into a large bowl, add all the cupcake ingredients and stir to combine.  Divide the batter evenly among the cupcake cases.

4.  Bake for around 15 minutes or until the cupcakes spring back when lightly pressed on top.

5.  Allow the cupcakes to cool.

6.  To make the caramel sauce, blend all the ingredients until smooth in a high speed blender or Thermomix (around 1min/sp9).  Drizzle over the top of the cupcakes.